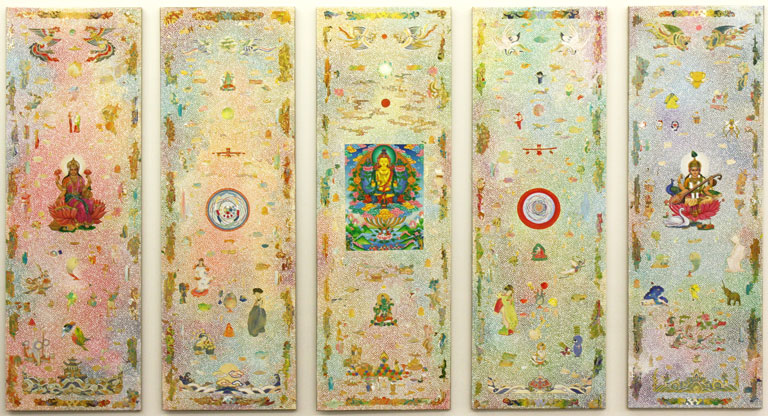 The work in this exhibition explores my interest in the visual signs associated with various world cultures. It’s a style I’ve been developing for some years now that includes collaboration, quotation, transcription and a wide range of cultural references and techniques, including dots. I’ve immersed myself in a world of art styles in a number of ways, through travel, study, the information media and from personal contact.

The paintings reference a reality that is a bit apart from the modern, materialist, western world. By looking at indigenous, traditional and religious art I found new ways to paint and a new sense of purpose and possibility. The older traditions have elusive and transcendental knowledge that is still expressed as visual imagery and although as a western layman I can only emulate or quote it’s appearance, by doing so there is the possibility of resonance, with the original source and with the audience. There are further resonances within each painting caused by the combination and interaction of numerous influences.

The techniques I use, apart from the obvious, are stencils, stamps, the transcription of imagery from a variety of sources, the delegation of key parts of paintings to other artists and the use of dots inspired by Papunya paintings. The look of the work, what it looks like from a distance or away from the processes that created it, is a nostalgic attempt to recreate the look of older less process based art styles where illusions are more than just transcient phenomena.

My experiences at Papunya in the 1980’s changed how I paint. My painting was already influenced by three years as a conceptual/performance/photo documentation artist and when this was combined with what I learnt at Papunya and later from Tibetan Buddhist painting, I was able to at least try and produce an art that transcended my own situation.

Other influences such as Japanese Shinto, anime movies and the cels used to produce them, Chinese embroidery, paintings in the caves at Dunhuang, Daoist styles and so on, have found their way into my work in one way or another. Recently these things have come together effortlessly, as if a continuously expanding imaginary world is a natural thing.

Some of my paintings are small and painted with an immediate, cursory style. This is almost an opposite to the more laboured dotted paintings full of intricately painted imagery. Over the years the style of these smaller works has begun to infuse the bigger canvases. It gets more difficult to paint in an immediate style as the painting gets bigger. This is because you can sustain small bursts of freeform painting on a small canvas easily but on a big canvas you have to either scale everything up or somehow stay fresh and inspired all the way through.

More recently I’ve begun emulating or imitating my own style. I am able to paste things together now with an immediacy that reflects how I paint the smaller canvases. At the same time I am making the smaller paintings bigger, hoping that this “fast” style will produce some large paintings.

Also important to the work are the artist’s I’ve collaborated with. Most recently this includes Nava Chapman, Yiwon Park and Karma Phuntsok. They each contribute something different to the work. When Karma Phuntsok paints Buddhist imagery it fits within a long tradition of sacred art as well as being a focal point in some of the paintings. Nava Chapman paints Hindu imagery related to his faith and practice and also paints within the existing style I’m using and Yiwon Park paints with a softer, distinctly personal and at the same time more contemporary style.