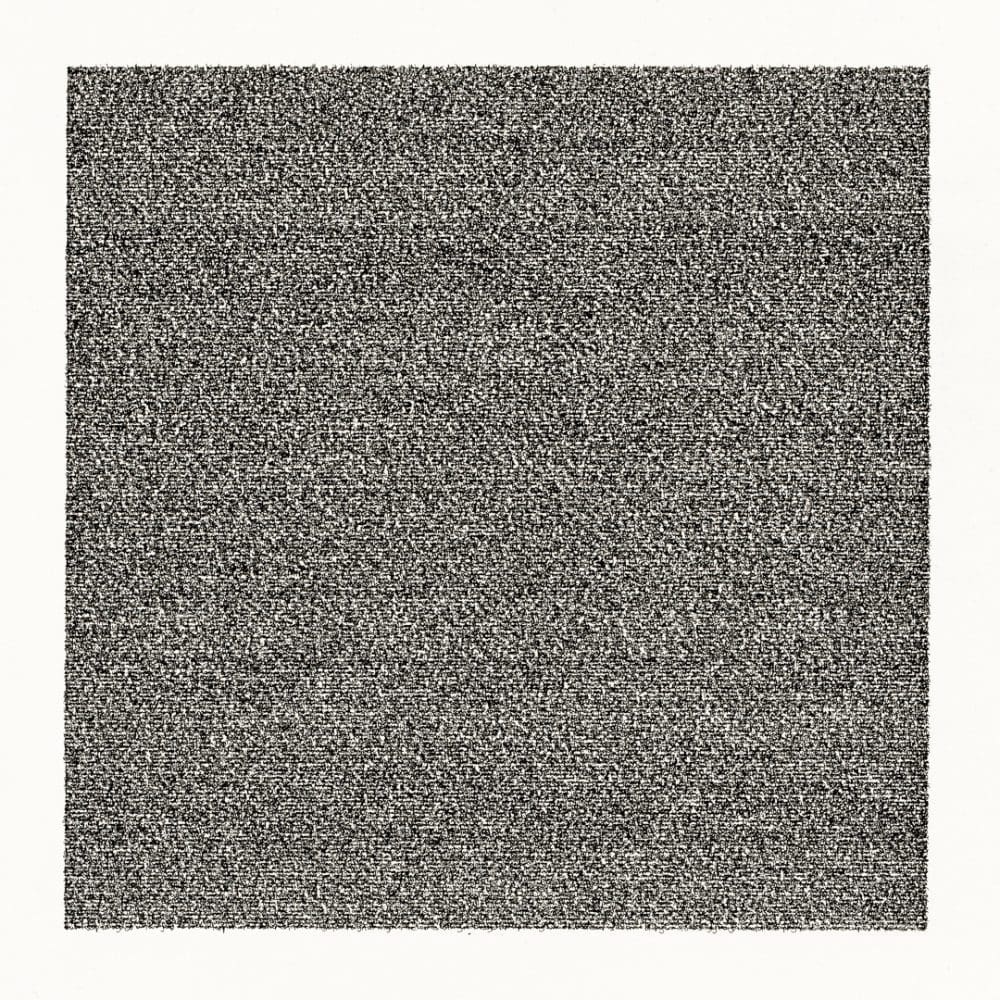 Fielden’s solo show ‘Approaching Zero’ focuses on the nature of infinity through minimalist works on paper and videos. One series of new works involves thousands of zeroes, a singular 1, and a decimal point. Depending on the placement of these mathematical elements, the work inhabits a space that is vast or minute. The theory behind this new series is inspired by Zeno’s paradox of infinite divisibility, where no matter how many times you half the distance to travel, you can never truly arrive at zero. Ultimately, the trail of numbers becomes a pulsing, abstract mass with a texture that recalls hand-woven linen or silk, adding an absorbing intimacy to a vast mathematical system.

Fielden will also include a selection of key video works that address the coalescence of forms. Fielden comments, “we see this happening in the world around us from the largest to the smallest of scales: the coalescence of celestial objects, of bodies of water, of fire, of bubbles, of atoms. In fact, right now we are part of a grand coalescence, as our Milky Way and the Andromeda galaxies are drawn together at a rate of 402,000 kilometres per hour, predicted to merge in about 4 billion years. Strangely enough, when the two galaxies collide, the probability of any two stars or planets colliding is almost nil. Closer to our daily experience, we might reflect upon coalescence in terms of our deep human desire for connection.” Related ideas about confluence also inform Fielden’s elegant paper diptychs that have been buckled by pools of black ink, like two seas colliding.

Fielden’s newest video work ‘Dialogue’ documents a performance commissioned by Parramatta Artists’ Studios, where the artist will break down a large limestone boulder into its smallest particles, attempting to bridge material and psychological distances.

Julie Ewington captures this in her recent catalogue essay for Emma’s solo show at The Lock-Up, “Emma Fielden has her head in the stars. Or rather, they are constantly in her thoughts. On one hand there is the grandeur of the universe, on the other the artist alone in her studio. That is the central conundrum of Fielden’s recent work: how to grasp that the world encompasses both the immeasurably large and infinitely small?”

Last year, Fielden’s realised her major solo show An Immeasurable Distance at The Lock-Up, which brought together the site’s architectural history as a place of confinement,and Fielden’s ongoing examination of infinite and infinitesimal phenomena. She has been a finalist in awards including the NSW Visual Arts Emerging Fellowship, Woollahra Small Sculpture Prize and The Blake Prize. In 2018, she was awarded the prestigious Art Omi Australia Committee Fellowship, selected to represent Australia at the Art Omi artists residency in upstate New York.